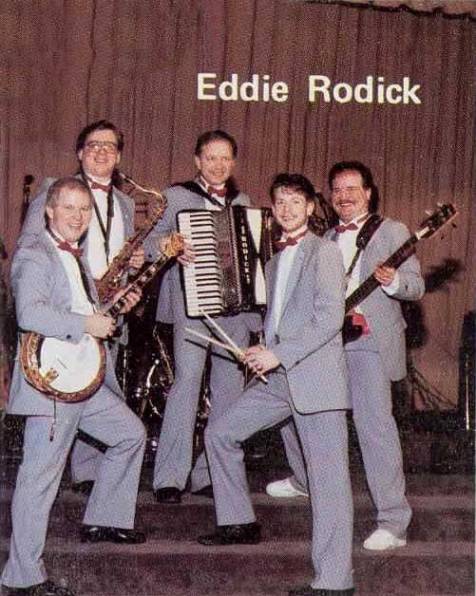 In the early 1970s, Eddie started “Eddie Rodick and the Goodtime Boys.” The group took the polka world by storm, recording the Goodtime Polkas album and appearing regularly on TV’s Polka Varieties Show, and was together for eight years.

Eddie formed a new band in the mid-1980s and into the 1990s. A still young Eddie Rodick III was included in the lineup on drums. The two Eddies were joined by Phil Syrnick on bass and Ron Sluga on banjo and guitar. They also provided vocals to add to the Rodick sound. Sax player. Frank Yasnowski, rounded out the sound of the band that would record and release three albums including a double cassette set saluting the many Cleveland-style bands from the 40s through the early 90s. They were named Band of the Year and won Recording of the Year in 1990.

While Eddie went on to form several more bands, the 1980s-1990s group was reuinited in 2018 – some 20-plus years after they stopped performing as a group. Hear the fantastic Rodick band with Eddie III, Phil, Ron and Frank once again at this year’s Illinois Polkafest. 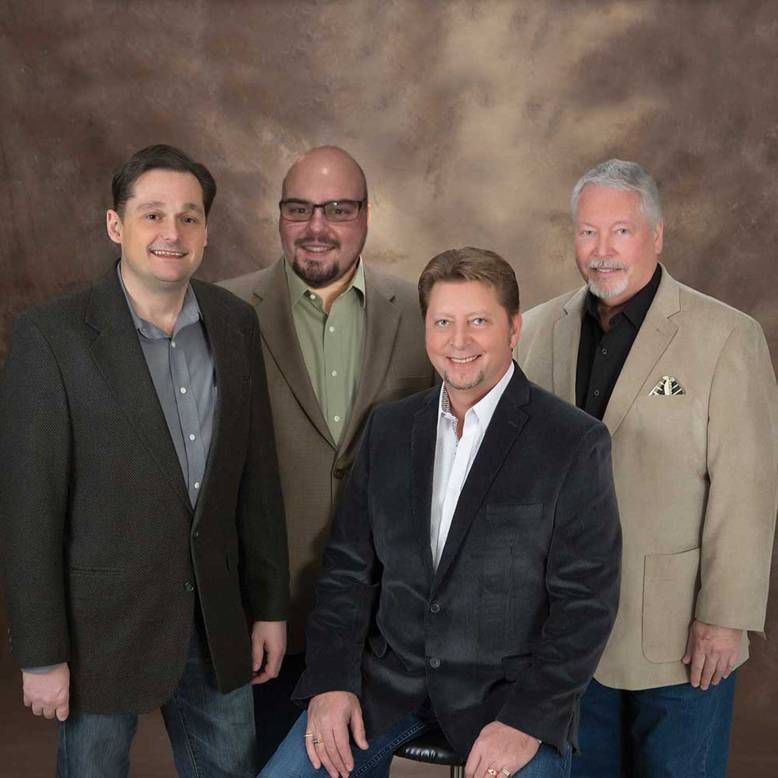 STEVE MEISNER is a multi-talented musician, entertainer, composer & arranger. He began playing the accordion at the age of 5 and has been earning a living in the music business since the age of 16. Steve’s family has a rich musical heritage and he is a second-generation full time working musician. His father, the late Verne Meisner, had a successful music career for over 50 years. Steve’s brand of music is extremely versatile and appealing to a wide audience. He has made a name for himself by taking the music he grew up with from his father and adding his own imagination and feeling. He has brought his brand of traditional American polka into the 21st century with a fresh spark & swing while retaining the roots of this music.

The Klancnik and Friends Band is quickly becoming one of the most dynamic and energetic groups in all of polka music. Specializing in the “Cleveland-Style” of polkas, the band’s goal is not only to help preserve this genre, but to further evolve it’s distinctly American roots. The KNF Band also represents a much needed movement in the polka field, presenting a group comprised entirely of younger, talented musicians who are completely committed to playing and advancing this unique art form. The band’s sound can be very aggressive at times. It has been described as a “Polka Powerhouse” and as being a “Polka Inferno.” One critic wrote: “The band totally rocks, with a sound that I would call Neo-Slovenian.” In addition to their hard driving polkas, the group also performs several other styles of music that compliments their instrumentation and individual abilities.

David Austin started playing the accordion at age 10. Shortly after that he began performing with his dad, Mike Austin, in the Russ Wilson Band. Since those earily beginnings, David has gone on to perform and record with a large variety of bands including Roger Bright, Denny Anderson’s International Main Street Polka Band, Walter Ostanek and countless others.

David has lead his own band, releasing his first recording, Party Time Polkas, at age 25, followed by two more releases, It’s a Good Day and his latest, Sweet Polka Dot. Together with Cliff Penniston on banjo and guitar, Craig Ebel on drums and Don Hunjadi and sax, clarinet and flute, this Cleveland-style band has performed at multiple festivals, and now will return to the Illinois Polkafest for 2020.

You are certain to enjoy this energetic, exciting band playing some of your favorites together with some classic sounds of Kenny Bass, Johnny Pecon, Frank Yankovic and many others.

Jack Tady has kept a pulsating rhythm in polkas since he was fourteen years old. As a bandleader and drummer, Tady may have changed the name of the band and the musicians in it, but the beat has always been steady.

He started out in 1952 with Jack Tady and the Russ Slovenes, the Jack Lads/Polka Lads, and Jack Tady’s Swingin’ Laddies. In 1973, the name changed to the Jack Tady Bears, the JTB, and now Jack and his Tady Bears. But the title Tady likes the most is “Western Pennsylvania’s Polka King.” Radio listeneres of Bill Seles’ Polka Show voted Tady the honor in 1968. He was thrilled that Polka King Frankie Yankovic was on hand to crown him.

Slovenian polka music was the music of choice in the Tady household while Jack was growing up. He and his friends would gather near the stage of the former West View Park in Pittsburgh each summer to listen to their polka idols – Frankie Yankovic, Kenny Bass, Eddie Habat, Johnny Vadnal and Walter Ostanek. Those musicians were his inspiration to start a polka band of his own.

Jack was delighted to play on five recordings with the Frankie Yankovic band, and in a polka medley on Walter Ostanek’s Grammy-nominated album of 1997. Tady added polka radio host duties to his repertoire in 1982. Jack Tady’s Polka Place has been on the air ever since – currently Saturdays on WKYB in Pittsburgh. 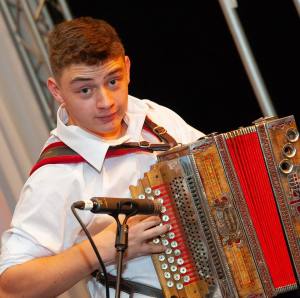 Back for their second year, Ron Likovic and the band will make another appearance at the Illinois Polkafest. Joined by both of his sons, including new button box sensation TJ, the Likovic’s will provide some great button box music for you to enjoy!

Ron has been called one of the very best button box players Cleveland has ever seen.  He has recorded and released several albums and has been featured as a guest artist on several others. His band has been showing up at various festivals for years and will now add the Illinois Polkafest to that list.

Ron’s son, RJ, has been appearing on the bandstand playing drums and will be behind his father and younger brother when they take the stage. Destined to steal the show is young TJ Likovic who clearly takes after his dad in his precise performances every time he plays. If you have not yet seen this young button box prodigy, you won’t want to miss him as he joins his father. Get your button box fix with the Likovic’s! 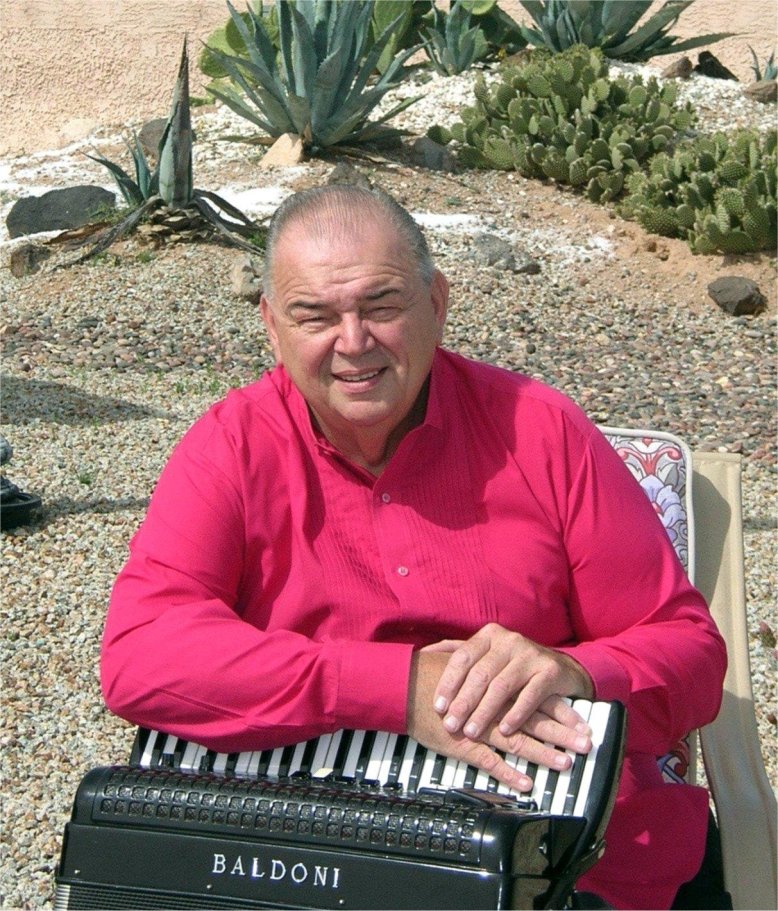 Bob Doszak has been entertaining and supporting Polka music most of his life which is 60 plus years of playing the accordion! Born in 1946 in Joliet, Illinois to parents of Slovenian and Polish descent. His natural heritage helped instill his style of music. Bob grew up in Joliet where he had resided until relocating to Arizona recently. The neighborhood where he grew up consisted of mostly Slovenians, Croations and people of Polish descent.  Across the street from his childhood home was a tavern that always echoed of polka music. That is where Bob was first introduced to polka music.  At the age of 6, Bob started taking accordion lessons. At the age of 7, Bob had his first performance with none other than America’s Polka King, Frank Yankovic. With the support of his parents, by the age of 8, Bob was the featured accordionist at the Baby Doll Polka Club in Chicago and began playing private parties in Joliet and the surrounding areas.  Around the age of 14, Bob started his own band, and within a few weeks the band found themselves playing seven nights a week. Bob and the band continued this all through Bob’s high school years.

Bob had been the key organizer of the annual Illinois Polka Festival in which was held in Oakbrook, Naperville, and Schaumburg Illinois, for 27 years. Just last year he passed the festival down to his son, Chris, to continue the annual tradition.  Bob plays a wide variety of polkas, waltzes, and old-time American standards, and is known to play a few sing-along medleys.

Watch As We Count Down To